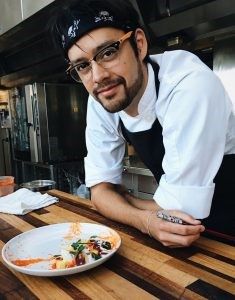 Growing up, John Kett loved science and his parents expected him to pursue a medical career. But, one year into pharmacy school, John realized that his parents’ hopes were no substitute for passion, as his interest and drive waned.

He decided to combine his love of food and science at the Chaplin School of Hospitality & Tourism Management. His parents are now proud of the work he is doing and his accomplishments. It was largely his parents’ backgrounds in hospitality, and John’s upbringing in a multicultural home with a Filipino mother and British father, that forged his love of food and beverage innovation.

At FIU, John worked as a culinary lab assistant for Chef Roger Probst – a mentor – and served as a team leader for the Food Network and Cooking Channel South Beach Wine and Food Festival for three years. He also participated in competitions and research projects to create new spices for Badia Spices under the guidance of Professor Michael Cheng – another mentor and close advisor.

John hopes to continue his research and development career, and dreams of one day opening a bar and restaurant, spending the rest of his days doing what he loves most.