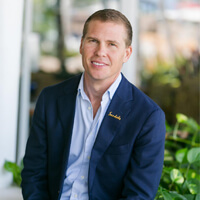 Adam Stewart is Executive Chairman of Sandals Resorts International (SRI), the company founded by his late father, Gordon “Butch” Stewart and the organization behind the world’s most recognized brands of luxury all-inclusive resorts including adult, couples-only Sandals Resorts and family-friendly Beaches Resorts.

Prior to becoming Executive Chairman, Stewart spent more than a decade as Deputy Chairman and Chief Executive Officer of the organization, leading the brand’s transition to its now Luxury Included® signature and overseeing a period of great expansion that also introduced the region’s first over-the-water accommodations. His efforts have been recognized by numerous hospitality industry awards including being named the 2015 Caribbean Hotel and Tourism Association Hotelier of the Year. He now follows in his father’s footsteps in leading the strategic vision of the company as it prepares for a bold strategy forward.

In addition to his expanded role with SRI, Adam Stewart continues his leadership role in the family’s extensive hospitality, media, automotive and appliance business holdings, including his position as Executive Chairman of The ATL Group, comprising the Jamaica Observer, the country’s leading daily newspaper and ATL Appliance Traders, a chain of domestic and commercial appliance outlets combining exclusive distributorship of the world’s top electronic brands and ‘unbeatable’ customer service throughout Jamaica.

An entrepreneur in his own right, Stewart is founder and CEO of leading attraction and tour company Island Routes Adventure Tours, offering more than 500 tours in 12 Caribbean destinations, making it easy for visitors to authentically connect with locals and experience the region.

Deeply committed to the region, Stewart is President of the Sandals Foundation, the 501 (c) (3) nonprofit organization aimed at making a difference in the Caribbean communities where Sandals Resorts operates. One hundred per cent of the monies contributed by the public to the Sandals Foundation go directly to programs benefiting the Caribbean.  He is an active member of the Jamaica Hotel & Tourist Association, where he previously served as 1st Vice President and is chair of the country’s Tourism Linkages Council, which seeks to enhance the capacity and competitiveness of local suppliers, making the strength of tourism work for all.

Recently appointed to the Executive Committee of the World Travel & Tourism Council (WTTC), Stewart is a graduate and active alumnus of The Chaplin School of Hospitality & Tourism Management at Florida International University in Miami.  A dedicated runner and outdoorsman, Stewart lives in Montego Bay, Jamaica with his wife Jill and the couple’s three children.