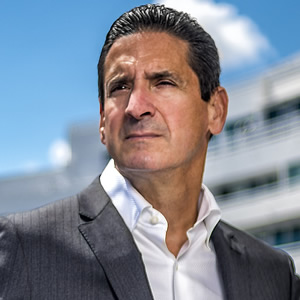 In his role, Mr. Goldfarb oversees all aspects of the oceanfront resort, with more than 20 acres and over 1,500 rooms and suites. Under his leadership, Fontainebleau launched BleauLive, the hotel’s entertainment platform that merges one-of-a-kind vacation experiences with performances by top musical artists. He has been instrumental in enhancements, including new restaurant concepts and multi-million-dollar renovations of guest room towers. Prior to joining Fontainebleau, Mr. Goldfarb served as President and COO for seven years at Turnberry Associates, and spent the six years prior as President and COO of All Florida Hospitality Management. Mr. Goldfarb previously spent 13 years at Doubletree Hotels Corporation, where he served as General Manager, then as Southeast Regional Director of Operations, overseeing 15 hotels in Atlanta and throughout Florida, and finally as Vice President of Development, responsible for managed and franchised development. Mr. Goldfarb served for over a decade on the Broward County Tourist Development Council, and was awarded with the Distinguished Tourism Trustee Award in 2005. He also played a significant leadership role as Chairman on the Marketing and Advertising Committee. He is a graduate of Florida International University’s Chaplin School of Hospitality Management and in May 2014, was appointed Chairmanship of the Hospitality School’s distinguished Board of Directors. Mr. Goldfarb has served as Vice Chair most recently, and on the School’s board for almost a decade. He was awarded the Hospitality school’s “Torchbearer Award” as well as the University’s prestigious “FIU Medallion” in 2007. Mr. Goldfarb is involved with “Best Buddies,” “Big Brothers, Big Sisters” and “The Christopher Reeve Foundation.” In 2012, he was honored by South Florida Business Journal as one of “2012 Power Leaders” and in 2013, the Miami Beach Chamber of Commerce awarded him its prestigious “Excellence in Tourism Award.” In addition, Haute Living Magazine named Mr. Goldfarb one of the top 100 most influential people in Miami for 2013 and 2014.